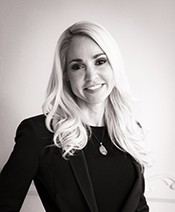 Kim is the President and spokesperson of Lockets 4 Charity. Raised in Austin, Texas she traveled extensively as a child with her family who were in the Military. After school, Kim started a modeling career appearing in television commercials, print and promotional events for several national companies and runway for local companies till the birth of her daughter Makena in 1997.

In 2000, when she could only stay with her sick newborn son Trey thanks to the help of Ronald Mc Donald’s House, Kim had her first experience of the importance of charity… as a beneficiary. It made her realize that the most important thing in her life was being a mother and that she would have the mission to give back one day. “I want to raise my children with love and compassion for giving back to others” she says.

A Houston resident since 2011, she and husband Mark have joined force with renowned jewelry designer Matthew Campbell Laurenza to form Lockets 4 Charity: an innovative way to support programs dedicated to helping children and woman where 100% of profits go directly to charity.